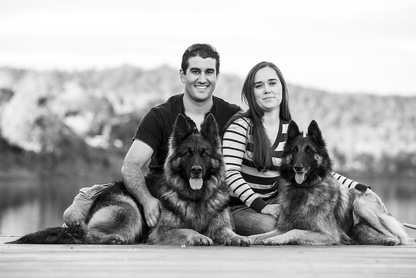 Brian and Melissa came together March 2009 and agreed that keeping fit is a must, bringing the dogs along just makes it so much more fun.

We enjoy the dog sport world as novices/beginners and hope to make achievements with our pack as we go along and learn. We believe that there is always something to learn in the dog world.

As a team Brian and Melissa want to provide mental and physical exercises with our dogs. We want our pack to be healthy and thriving – so much more than simply back yard pets.
At the end of the day, win or lose, our dogs are part of our pack and are cherished as members.

Melissa: Personally what i love doing is training and learning more about dogs in general. I very much love a day out with my dogs and im not 'competitive', i take each event as a learning experience. I love mixing up our outings with different arenas and sports.  I find trialing much more rewarding than showing, but i still enjoy a friendly show all the same.

Brian: As for me showing has zero interest to me. I much more prefer an outing to the beach/park/lake running and playing with the dogs - especially making them fetch the ball out from the water. I enjoy a dog that is happy to play but calm and quite in the house, happy to be patted and get belly rubs while watching a movie on the couch at night.

﻿What have we achieved in competitions?﻿

We first started showing dogs in early 2010 with our first Finnish Lapphund Frost (Janoby Dare Tobe Cream), since then we have titled 5 Aus﻿tralian Champions, with our first in early 2011,  Raiven (Watersedge Enchanted Destiny) our Finnish Lapphund and followed by Cynder (Deviebelle Eldo Cynder) our BSD-Tervueren being our second later in that year.
We have competed so far in NSW, ACT, VIC and QLD at both Specialty and All Breeds levels. We have won Multiple Class in Group, Runner Up in Group, Multiple Class in Specialty Show and Runner Up in Specialty Show awards with some of our dogs.

Not limiting ourselves to just the show rings, we first started trialling in 2011 in Herding being our first sport with Cynder who gained our first title Herding Test Trial (HT), since then
we have officially gained 3 Herding Titles.
This was also the same year (mid 2011) we started Agility trialling with, again, Cynder who was our first to title in the arena in 2012, we have since obtained 5 titles in Agility.
During early 2012 we have ventured into the Endurance Test which we also gained a title for Cynder.
This was the same year (2012) where we tried for the first time Rally-O and was able to obtain our first passes with Storm and Cynder. Since then we have obtained 4 Rally-O Titles, with Socks & Nitra being our first to titled in this field, during mid 2013.
During 2018 i decided to try some new sports and gained our first Luring title (JC) with Knight, but also Cynder and Temper also gained a pass too. Knight also gained our first Working Pack Dog (WPD) title which was another lovely experience.

As for our prefix TOUJOUR we have been very fortunate to have some lovely and dedicated owners out there that have given a go some different sports!

We own and work with our dogs to keep up metal and physical stimulisation.

We do not believe that only show champion dogs are worthy of breeding. We believe that our dogs must have clear health records and meet the standards in type and temperament. To breed is to add to the gene pool for the future of the breed.

We don't believe a dog just to be a 'pretty picture', we like our dogs to have a drive to please and work. We want to take our dogs out there into the public and let people see the best our dogs can be.

How it all Started

Melissa started out with Storm our German Shepherd and was attending Obedience training on a regular basis. It was there that the 'world of dog sports' was first introduced to her. Deciding that a German Shepherd was a little too large of a breed, Melissa ventured out to dog shows and contacted many breeders enquiring about their breed and whether they would suit our lifestyle. What she didn't expect was Brian found his breed of choice in the Finnish Lapphund!

Brian simply spotted a Finnish Lapphund at a show and was smitten instantly. He went home and searched more about the breed and went on to purchase his own dog.

A little while later Melissa finally found the Belgian Shepherd and a puppy that she had been searching for. Cynder came into our lives and she has not disappointed.

Why these dogs - why not all the same breed?

As you may have noticed we dont own just the one breed . . . when we go out, the general public never ask why we own multiple breeds they simple enjoy the commotion and ask questions about the dogs we have out and about.
But when we go to compeditive arena it is a question that gets asked of us or a comment thats asked 'behind' us.

Brian and I differ on our likes of a breed of dog; from appearence to level of drive and capabilities.
Brian only cares for the health and good nature of a dog, their love and devotion - not to mention playfull and cuddly. Brian loves playing fetch, going a for walk or jog at the beach or lake with the dogs, but at the end of the day having mellow couch dogs. Brian has no love for the showring but enjoys the day out and the social aspect.

I on the other hand enjoy competitive sports including the training. For me i want a dog thats focused on learning and willing to try. From showing to agility, dabbling in herding and obedience - i enjoy training and seeing how the dog works under different situations to gain an outcome. I really love drive but i really do enjoy an off switch too.
Not all breeds, let alone individual dogs of the same breed, train and/or work the same as another. I personally enjoy a focused workable dog with a good amount of endurance. Also i enjoy the variety of learning how to train and then work a dog.
For these reasons we own more than one breed and why we dapple in different dog sports.

I highly doubt we will ever be a 'one' breed home, but remember i am a dog enthusiant.

We are devoted to the dogs we own and try to provide them with a healthy sitmulated life, along the way learning about the breed that they are and how to train and work with them.
The breed is less important to us than the actual dogs we own, we always put our dogs best interests first, we do however do right for our dogs' breed. Health and temperament is our most important factor.