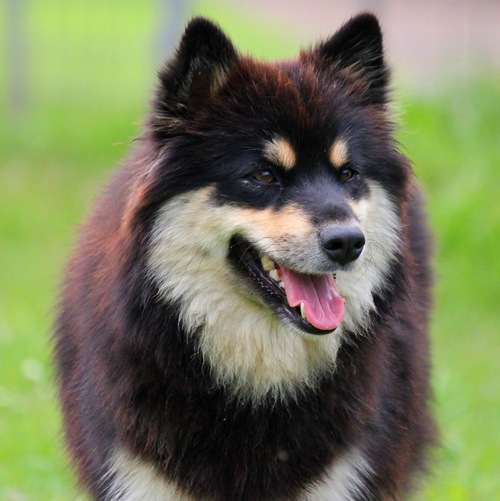 Dam to the following litter: AMOUR & DOUX & FABULEUX & IMPEC
Raiven's movement is easy and natural so easy to watch and appreciate. She has beautiful eyes that are very expressive that add to her 'teddy bear like'.

Raiven is a stunning and sweet girl that we are extremely pleased to own, she is very laid back and enjoys a simple life which demands very little. Say "work" and Raiven is locked on and focused, making her a little star in the show ring.

This gorgeous girl has a willingness to work and loves being involved.

She can be caught sneaking off with socks if they aren’t picked up quick enough.

Raiven loves cuddles and belly rubs, which is typical of the breed and enjoys running around down at the beach and getting her paws wet. 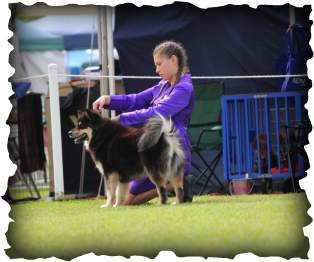 We are very proud of Raiven's sweet temperament and easy working ability and were happy to let her be used during Junior Handling - Doesn't Raiven and Jade look great out there together!
This just shows that Finnish Lapphund's, especially Raiven, are fantastic with kids.

2011:
Raiven completed 2011 with 35 show competitions in NSW, ACT and VIC - with amazing results!!
Through the DOL Point Score Competition Raiven placed:
1st NSW Best of Breed and
4th Nationally Best of Breed!!
Out of more then 30 Finnish Lapphunds competing.
26-04-011
At the Country of Cumberland Show under the Finnish Judge Ms Leila Karkas, Raiven was one of 15 Finnish Lapphund entered - the highest entry for an All Breeds Show in NSW! (other than a Royal) [Held til 2013]
Raiven was against more seasoned and awarded Lappies, but she was recognized as Best of Breed earning a lovely 20points. What a star!
05-12-2010
At the ACT Ladies Kennel Club, at 6mths and 5 days old Raiven took her first Best of Best against 3 other Finnish Lapphunds of more developed ages. Raiven didn't stop there, she continued and took out Minor Baby in Group!!